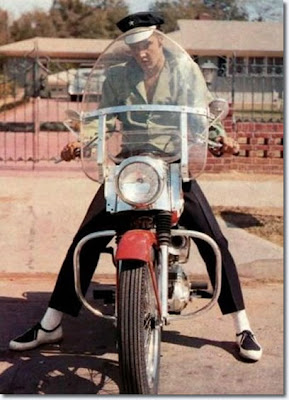 The king of cool, the king of style and of course "The King of Rock N Roll". Elvis needs no introduction and theres plenty of pictures of him sitting in the saddle of various Harley's. Look at that hat. The white star, the white brim. The same style of hat worn by Johnny in the Wild One. Purely iconic. 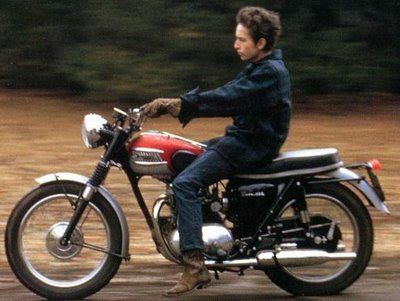 This picture of Bob Dylan riding his Triumph has been used plenty of times before... 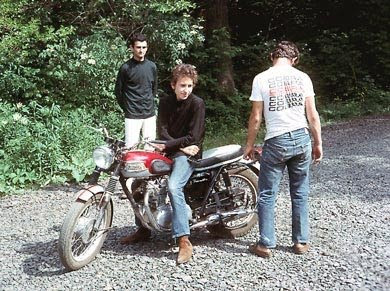 ...but this behind the scenes photo is a little more obscure. I love that Dylan rode a Triumph. It just makes him that much cooler, if that's even possible 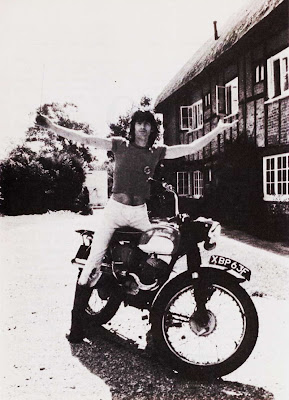 KEEF! Keith Richards, whats up? I can't really tell what kind of bike you're sitting on. Almost looks like a Tiger Cub, but it could be anything, you're Keith Richards. 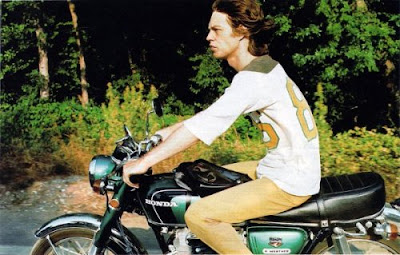 Mick Jagger crusin' on a honda CB350 (I'm pretty sure). Once again, I'm not the biggest Honda fan, but Mick makes anything look cool (even old age... tee-hee) 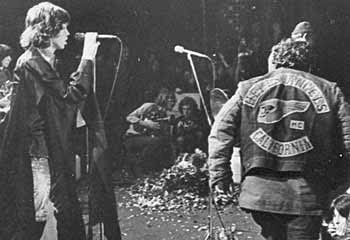 The Hells Angels once ran security at all California concerts. Rumor had it there was a plot by the Angels to off Mick for vowing never to use the Angels security again. This followed the death of an 18 year old fan at a Stones concert the Angels were working. This is of course all alleged and I'm just spitting back what I read on Wikipedia. Google it and see for yourself and always, ALWAYS support your local Hells Angels chapter. 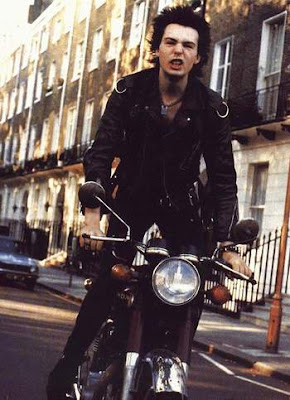 Sid Vicious also riding a Cb350 although I'm sure it was given to him for the photo/video shoot for the day only, otherwise it would've been immediately hocked for horse. Someone had the decency to hook Sid up with a BSA for the "Something Else" video (which is great by the way.) 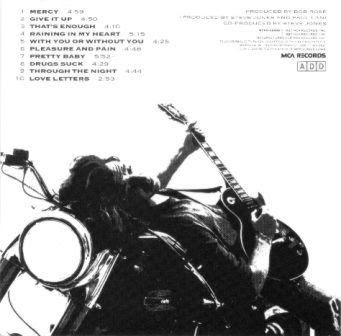 Fellow Pistol, Steve Jones, draped over his machine on the back of his 1987 debut solo album. Check out Steve with long hair! 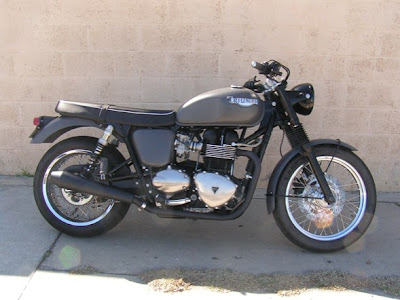 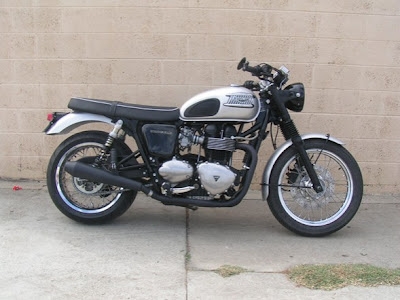 These are two of Steve's latest customized Triumph Bonnies. 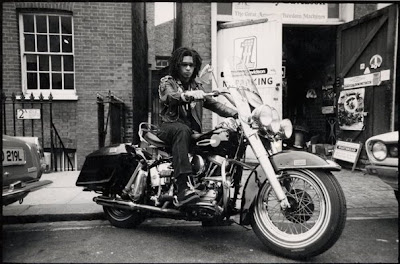 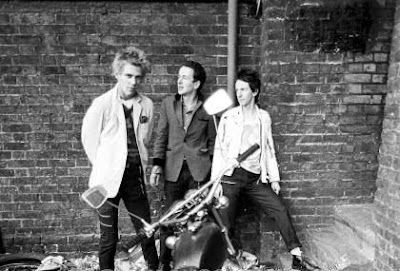 Speaking of the "West Way to the World" producer, we can't overlook his documentary subjects in front of an unidentified bike (Looks like a Yamaha or Suzuki, but the Clash rule and I highly doubt that the bike belonged to them anyway). 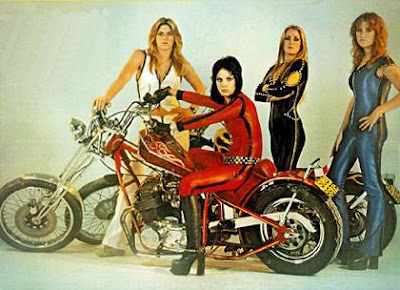 I just saw the Runaways movie and one of the scenes was shot in California (via Harrisburg PA) bike builder Justin Kell's shop, Glory Sales. Joan (played by Kristen Stewart) throws down a sack of coins and bills and tells the clerk "I wanna look like that" pointing to a 59-club era Rocker/fellow store patron. The real Joan Jett is hot. If only I could be a lesbian and date Joan Jett.... Oh yeah, here's a picture of the Runaways with some sickles. 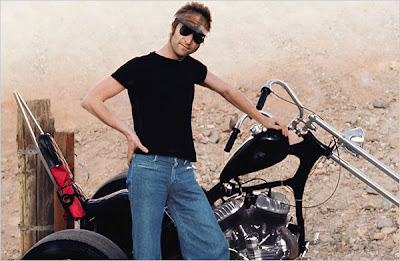 Not the coolest shot of John Lennon. But John was a revolutionary, changed rock music and changed the world. He also liked trikes apparently. 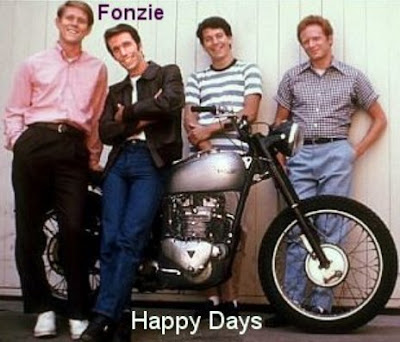 Ok ok, not a rock star by any stretch, but he could start a juke box with his fist, had an office in the mens bathroom at the local soda shop and rode a Triumph motorcycle! 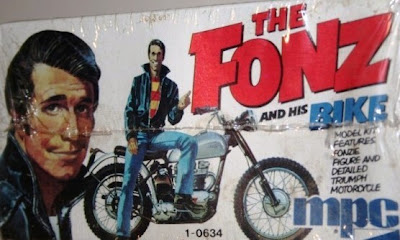 Now this is a model I'd love to get my hands on. Fonzie AND his Triumph. Let me know if you have one you wanna trade.

British motorcycles have always been my main interest in the world of two wheeled vehicles, but I have a soft spot for 60's and 70's Japanese engineering. They made great reliable engines, the bikes have clean lines, and they are cheap and readily available to make cool custom Cafe's and Bobbers. My friend Justin took a trip to this spot and shared a couple of pictures. Looks like I'm going to have to investigate further....
Justin: (photos sent via iPhone:) 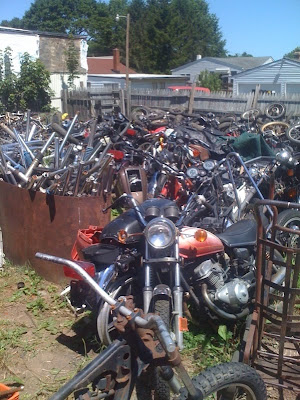 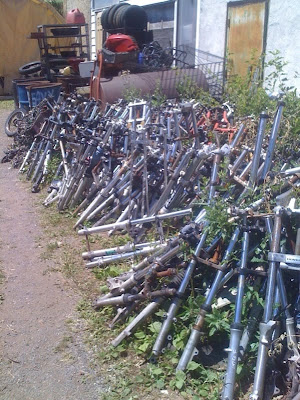 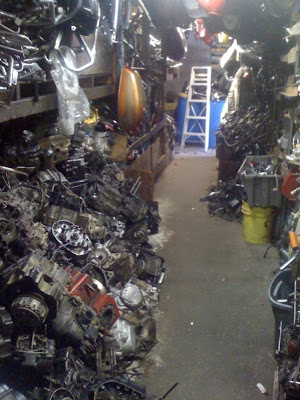 Me: Holy shit! Are the prices reasonable?
Justin: Dirt Cheap
Me: Are you still there? (thinking about some parts I could probably use on my CB 350 and 450)
Justin: Just left. I'm probably coming back in a few weeks if you're interested.
Me: hell yeah!
Posted by Matt at 7:04 PM 2 comments: