The following pictures came from an old dusty box that my friend Graham rescued from a flea market. There are hundreds of black and white shots from 1960-1969. I am trying to sort them out but it's difficult since they're all mixed together. These 9 were rubber banded together and a few had captions written on the back with a few recognizable names such as Jimmy Weinert (still an amateur here) as well as Tony Distefano. Based on the club jacket in the first picture these appear to be taken at a track in Trevose PA put on by the Road Winders Motorcycle Club. If anyone has any more info on these, please get in touch. 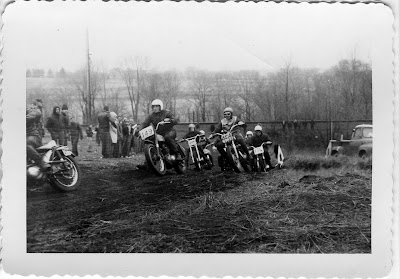 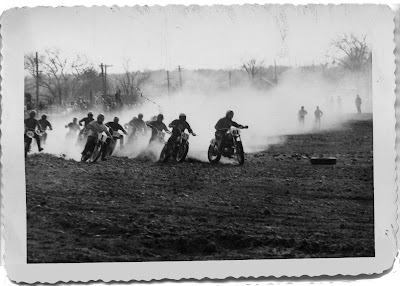 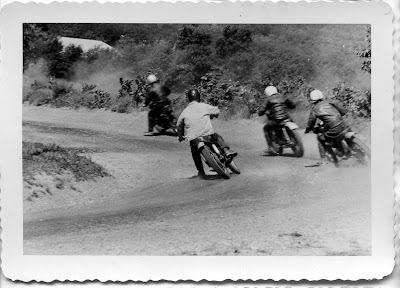 I'm feeling a little in over my head with the tuning of this motor. I've decided to scale back a bit, start with a solid running, fine tuned, Pre unit engine and make it fit the frame. Tricking out the engine will come, possibly on the second 650 motor I have cases for. That way I can do the heavy mods and possibly do billet con rods new crank and do it right from the ground up. It's going to take a lot of time and money - both of which I don't have much to spare at this moment.

This morning I took my barrels over to a local machinist who specializes in performance engines. My neighbor Woody knows him from way back and is having him do the total engine rebuild on his A10. I am having the one hole in the engine case repaired (its right where the dynamo attaches. They are also boring the cylinder out to fit the .06 oversize pistons. Hopefully I'll have those back in the near future... 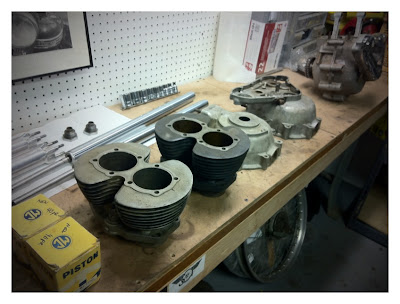 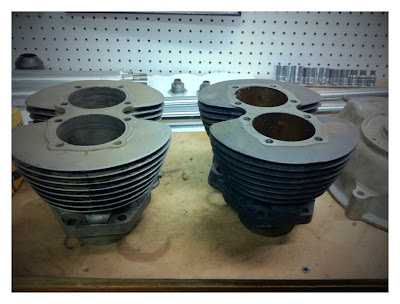 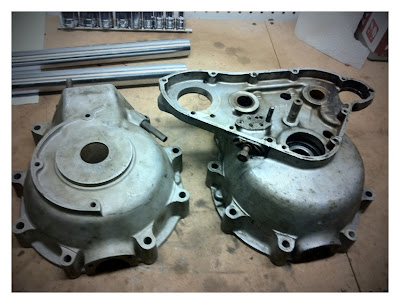 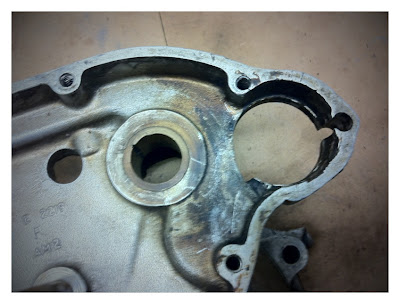 I started collecting parts about a year ago for some sort of ground up build. I wasn't sure at the time of what I wanted, only that I wanted to use a triumph 650 pre unit engine in some frame other than a standard triumph frame aka a special. Well after helping my neighbor rescue his 55 A10 from 40 years of deep storage, I started thinking about the beauty of the A10 frame. TriBSA cafe's are much less common than the Triton (which everybody seems to be building these days - most of which are not done very well).  I have a frame and swing arm, a stock oil tank if needed, a possible set of forks, though I'm thinking Norton Roadholders, a massive twin dual lead front brake from a GS750 and a basket case pre unit 650 with trans with an extra set of cases, gear box case and the option of cast iron or alloy jugs. I need to figure out the rear tire, the gear ratio, carbs (thinking going balls-out twin AMAL GP's which will require a different cylinder head) Lucas competition mag and an assortment of engine mods and tuning to make it a road racer aka high compression pistons, race valves and springs race cams etc.... basically anything to make this run well at high speeds. This bike will NOT be a daily rider, but more of a street legal competition bike that eventually will see the track. I need to figure out the rear brake situation. I see a lot of people using conical brakes of OIF Triumphs or BSA's, and some using Norton Commando brakes. I know manx brakes and other super rare and expensive braking systems would be awesome, but short of a really great bargain find, I doubt I'll drop that kind of dough on the rear brake. Something later will be fine with me I have a rear wheel thats period correct for this frame but with the mother of all front brakes, the rear brake I have seems wimpy. As far as styling - I guess it'll all depend on what type of tank I can track down. I could go for a beefed up Goldie look, or more of a Manx style like the botton bike - though I'd probably use a manx seat at that point. The trim is the last thing on my mind right now. I want  performance! 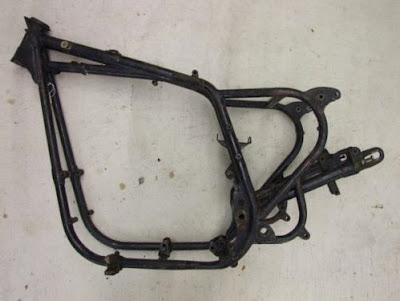 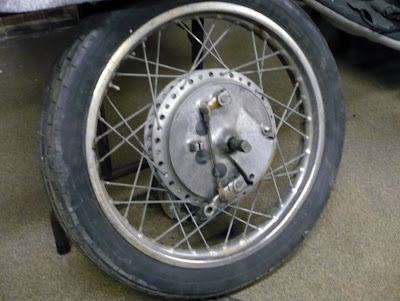 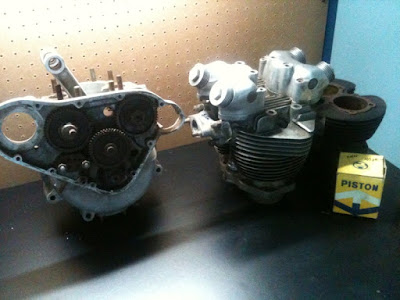 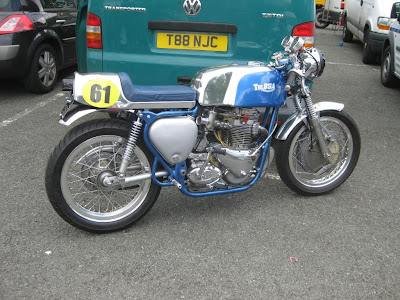 Just saw that someone snapped a shot of my "victory lap" on my dads Triumph T110. Beneath that is my dad riding the same bike 5 years earlier (note the paint scheme changed due to my dad deciding to mix it up a bit). The bike currently resides on a farm with 20 or more other vintage triumphs where they have plenty of room to run and play (Al Hartmans crazy cycle collection). It was an honor to launch the slow race off on that bike. It runs like a dream thanks to a much needed new magneto. Thanks for another great Turkey Pro National, Al!