After a week of cooler, rainy weather, the Northeast finally had a break with a weekend of mid 80's, low humidity and sunny skies. It also happened to fall on the same weekend as the Phoenixville 2nd annual Bike Day. I had a few friends who live in town who said they were going, so I hopped on my Triumph and rode through [what might have been] the perfect riding conditions of the year, up rt. 113 to the old steel mill town of Phoenixville. 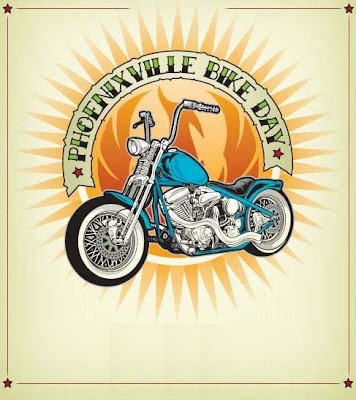 I have to admit, I didn't attend the first years festivities, but I gathered that this would be a Harley Davidson type crowd. Nothing against Harleys, but I didn't see a whole lot of vintage bikes, mainly straight off the showroom floor, full dressers. There were a handful of old Harleys, but due to the tightly packed parking configuration, they were hard to photograph. The last thing I needed was to pull a PeeWee Herman and start a domino effect of falling chrome and leather fringe. 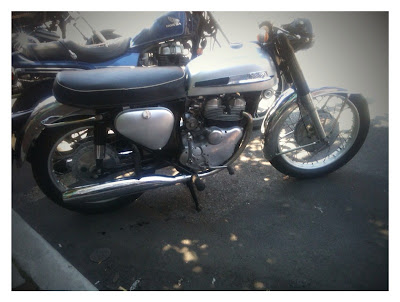 In a sea of American motors (some adorned with the bars and stars) this lovely little mid 60's Norton. Sadly this was the only classic Brit iron I saw in the sleepy little steel city. 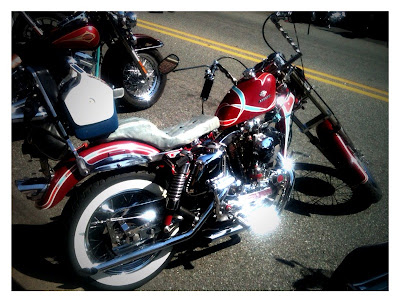 Now something about this Sportster just seemed to sum up the spirit of cycling. Maybe it was the out dated custom paint job, proudly holding it's own against the pompous, wide-rear-tire, reality-tv-show inspired choppers parked nearby. Maybe it was the small Igloo cooler strapped to the sissy bar, fighting hard to keep its precious cargo (most likely a 6 pack) cool against the beating sun. I don't know, but I dug it. 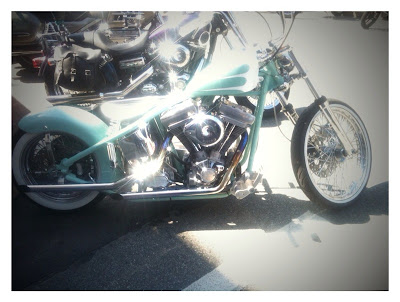 Out of all the custom H-D's this Shovel Head (? - I'm bad with identifying anything other than knuckles pans and flats) was the tidiest. The teal wouldn't have been my first choice, but I found it worked well with the scalloped paint job on the tank, the extra wide, rounded fender and the white grips. 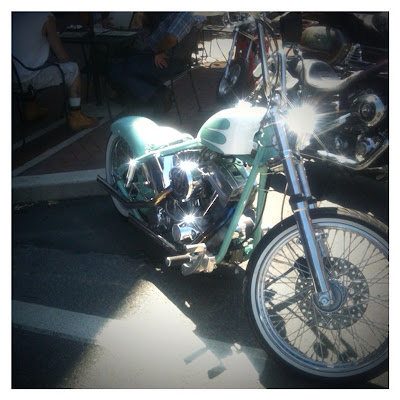 Unfortunately the shadow made it incredibly difficult to shoot. It was either too light or too dark - but you get the picture (no pun intended). 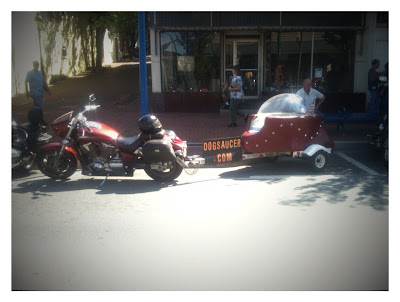 Now for the sight to be seen and what could and should probably be it's own blog post: The Dog Saucer. 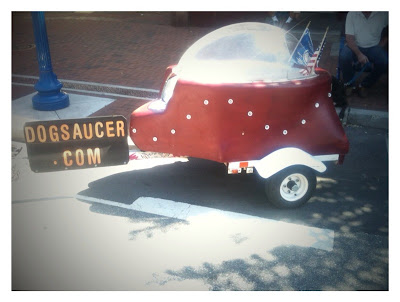 You got it, its a trailer, shaped somewhat like a space ship... for dogs! I love oddball stuff like this. It combines a kitschy attitude, a good sense of humor and furthermore - functionality. dogsaucer.com was advertised on a sign mounted to the trailer, so when I got home i checked it out. The thing that really bowled me over, was not the pictures of the adorable dogs riding behind their dads bike (I'm a dog lover, and my dogs are children to me, so yes, I am their father and so is the inventor of this device... But I digress) there is actually a picture of a goat, yes a GOAT standing in the saucer. Can you imagine riding down the highway and seeing a bike hauling a spaceship shaped trailer holding a goat?! Well if you live around the Chester County area and the weather stays as nice as it's been, don't be surprised if that's exactly what you see.
Posted by Matt at 7:31 PM