September 11, 2010, A day for remembrance of the tragedy that took place 9 years ago in NYC, Central PA, and Washington D.C.. Also day to celebrate the the continued freedom we have here in the United States.
In Philadelphia, the long running Hotrod Hoedown held another of it's long running Autumn vintage-auto appreciation parties at the Simeone Auto Museum, located in the industrial wastelands surrounds the Philadelphia International Airport. A perfect location featuring the museums collection of antique and historic autos, surrounded by long stretches of vacant streets.
My good friend Alex wanted to come down from NYC to shoot the event, so I agreed to meet him for a day of hanging out, checking out Hotrods, motorcycles and do some people watching. I was also excited to see the vintage motorcycle exhibit Simeone had been showing since the summer.
I hopped on my Bonnie t100 and headed north up 95 on what may have been the most spectacular riding day of the year. High 70's, no humidity and sunny skies.
From a high speed race up I95 exited onto the desolated streets of south west Philadelphia. A few turns and the streets became alive with the roar of Rat Rods, muscle cars and vintage motorcycles. Cars were parked a half mile in either direction of the front gate to the event, but I found a nice spot right by the entrance next to two beautiful Triumph Bobbers. One OIF hard tail and another mid 60's hard tail. The menacing machines glared at my Modern Classic but I didn't care, I was there for a day of fun in the sun, if those bikes don't like it then tough. 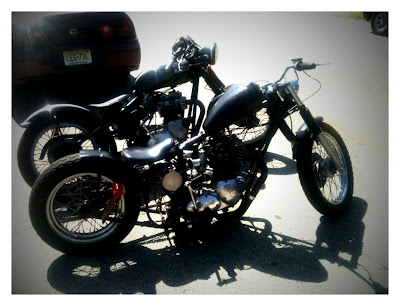 I paid the entry fee and immediately ran into my old friend Mike McCann. Mike has a 60's Plymouth Galaxy that he recently had the engine rebuilt and the seats reupholstered. 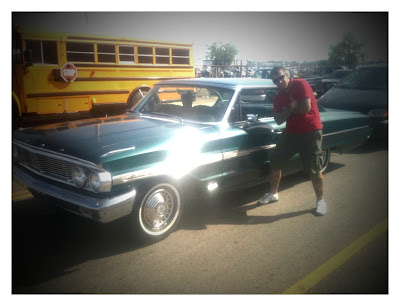 Mike gave me the obligatory "homeboy posing in front of his ride" photo op. Mike is a crazy old hardcore kid from Virginia. While in high school, I used go to shows in DC a lot, Mike rolled with a crew that terrified me with their aggressive style of dancing and stagediving (they perfected a move called the head walk...). Mike moved to Philly in 1996 and we got to know each other pretty well and we remain good friends to this day. 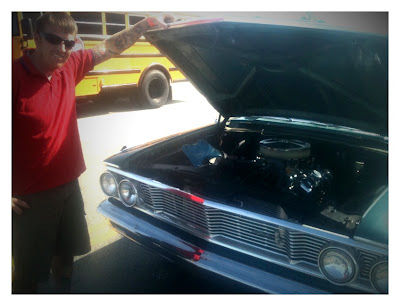 My iPhone didn't really pic up the details of the rebuilt 8 Cylinder, but you can tell that it is shiny. It packes a punch as well. 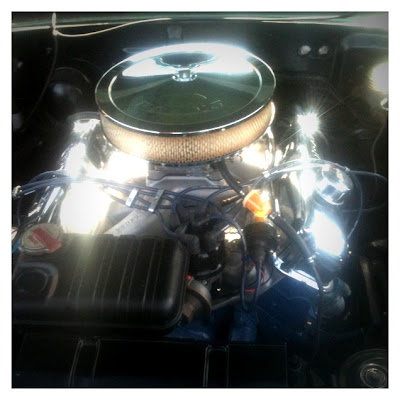 We took a spin around the vacant streets and did some burnouts as par for a good hotrod show. 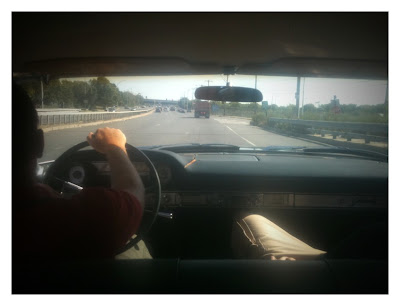 After our ride I met up with Alex for a bit and checked out the show. Lots of cars, a few motorcycles, but sadly, I discovered the motorcycle exhibit had ended. I kicked myself for not going earlier in the summer when I first heard about it. 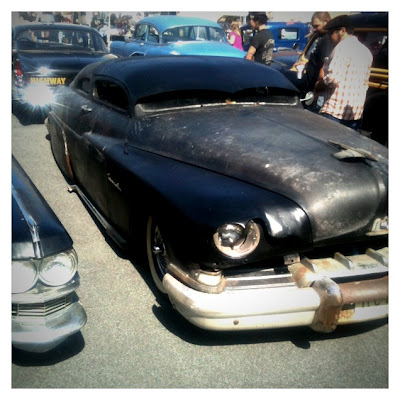 Out of all the beautifully chopped and painted hotrods, I found myself more drawn to the home build rat rods as I felt they had much more personality. This car jumped out at me and screamed pure evil. The windscreen was barely visible with its low chop and sun guard, the hulking flat black body boldly stated "don't eff with me". 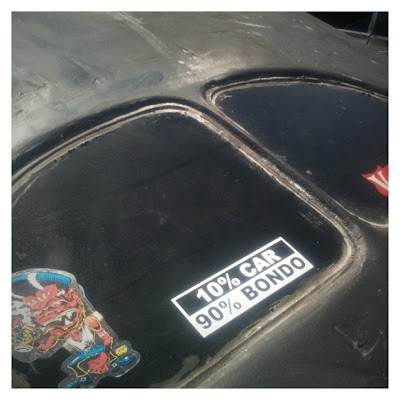 The decidedly rough body work was backed up with a simple statement. 10% car, 90% bondo. Clearly this was a big old one finger salute to all the high budget beauties parked nearby. 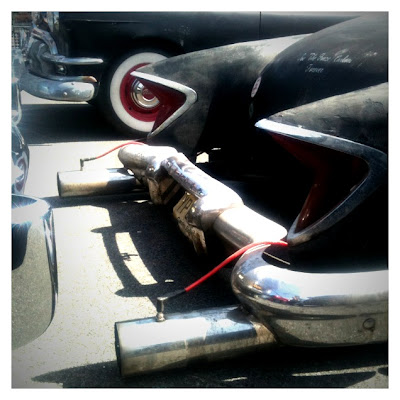 The pipes sat centimeters off the pavement. I bet theres quite a but of scuffing on the bottom of those bad boys. 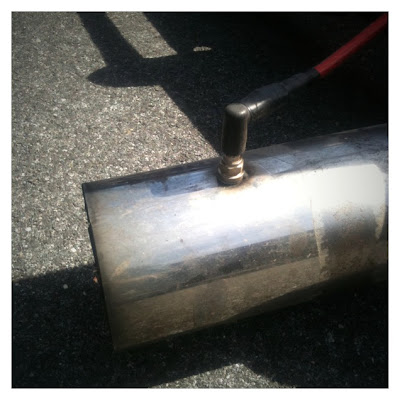 Spark plugs which will emit flames when a button is pushed, diverting the spark from the engine, causing fuel to flush through the exhaust where a spark awaits to blow an impressive fireball to unsuspecting pedestrians. Pure evil. On a side note, while in college, my dad had this mod set up on Triumph Tiger Cub, which has a great back story involving, modification, troubleshooting, and the burning of eyebrows..... but thats for another post. 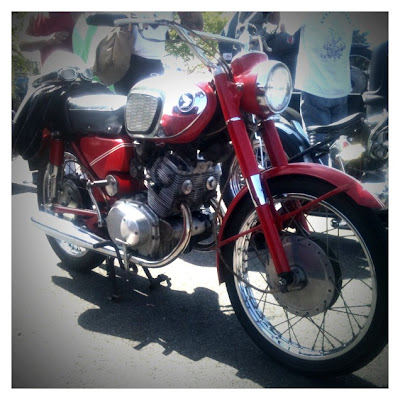 I saw a young lad roll in on this 60's honda. It rattled it's way though the cars and parked next to a Triumph Chopper. The rider removed his vintage Buco helmet, left it on the seat and went for a stroll through the fairgrounds. I snapped a picture of his bike. I felt that this kid got what it was all about. 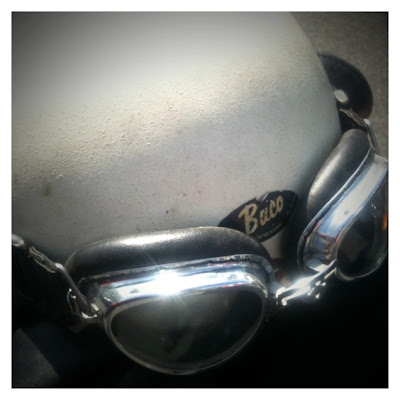 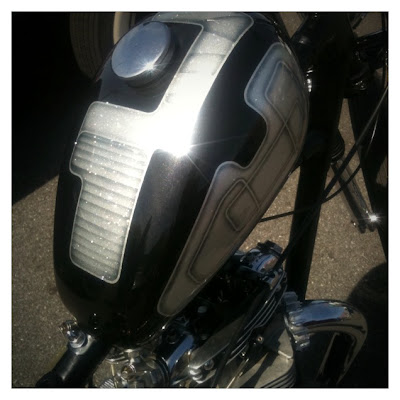 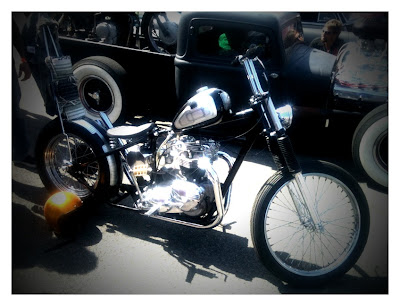 Choppers aren't my thing really, but I really appreciate the revival of this 60's/70's style that a younger generation is bringing back. Its a breath of fresh air in a stagnant chopper scene where contemporary choppers are more inspired by Television "kustom bike" shows than Easy Rider. 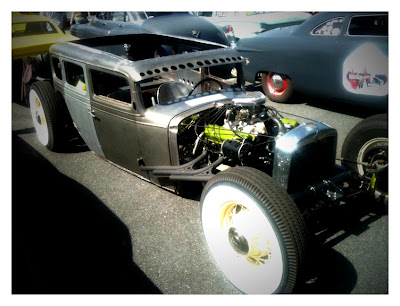 OK, cars are a bit of a mystery to me. They require a lot of space to work on them, money as well as car-knowledge, money to customize and even more money. Time, knowledge space and money, four things I don't have a lot to spare. Therefore I can't say much about the types of autos, or their motors. I can comment on cool aspects such as this semi finished open engine rod. It has green stuff on it which I like. 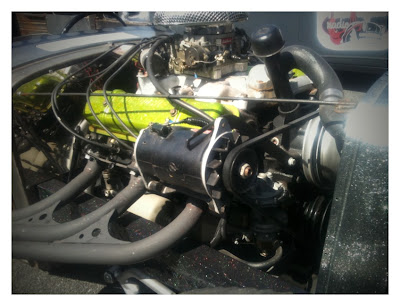 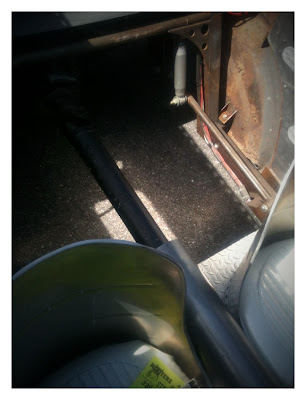 The bucket seats sit below the main drive shaft on a floor that sits inches above the pavement. There is no back seat or floor... or roof. You can literally drag your hand on the pavement if you wanted to! 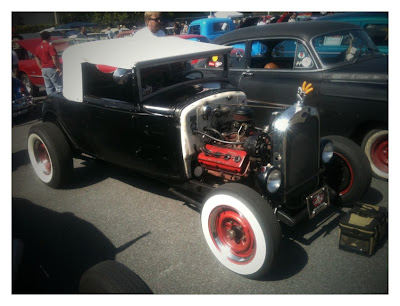 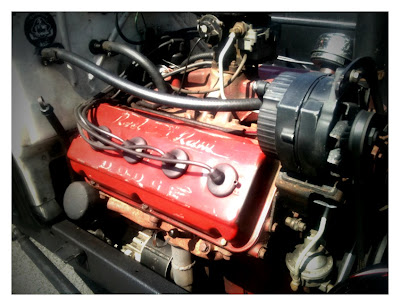 Ok, I have less and less to say about cars. I like the red on the engine thingy?
All in all, I saw some cool stuff, hung out with some good friends, was disappointed to miss the motorcycle show, but happy to be riding my Triumph to the event, even though my mirror fell off during the ride.
The coincidental date of the Hoedown falling on 9-11 was bitter-sweet. Sad to reflect on all those lost on that horrific day, but reassuring to see people still enjoying an important part of American culture. Cars and motorcycles!
Posted by Matt at 7:24 PM