It's been a long and brutal winter in the North East region of the United States, but finally, there's a milder climate creeping upon us. Tree's budding with green again, the sun is lingering longer, cinders have all but disappeared from the roads and the faint yet increasingly constant sound of motorcycles can be heard roaring in the distance after a long, deep hibernation. For many, the Perkiomen chapter of the Antique Motorcycle Club of America's swap meet officially kicks of the cycle season, bringing vintage bike enthusiests from all over, to the beautiful, rural town of Oley Pennsylvania.

Over 5 acres of vendors set up making the fairground into a scavengers paradise. Indian and Harley lovers get a dominant piece of the action, but British and European bikes and bits are plentiful. You absolutely never know what might turn up at Oley. Heres a selection of what turned up this year. 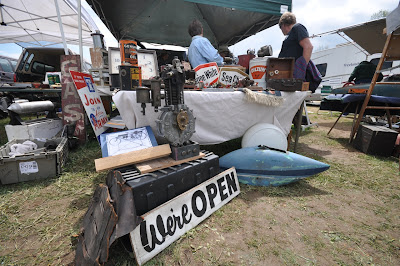 And with this booth as the first stop of interesting and unusual items, 2011 Oley Swap Meet officially is kicked off. 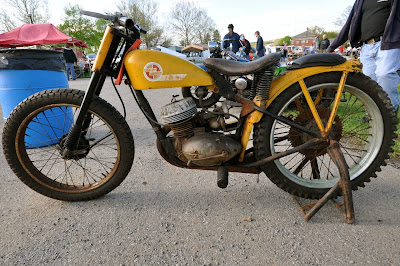 This mid 50's Harley Hummer caught my eye.  This is a fine example of a vintage bike you would not want to restore. Beautiful patina and oozing with untold history. The Hummer was a 2 stroke single ranging from 125cc (early models) to 175 (later models). The bike itself was based on a German DKW, which came about of the Allied forces plundering of post WWII Deutschland. Drawings of the DKW were also divvied out to To Great Britain, resulting in the BSA Bantam and Russia, who produced the MMZ M1A Moskva.

This Jawa is a late 50's (early 60's) 250cc Two Stroke Single, though it has dual exhaust pipes giving it the symmetrical look of a twin. The Czech based Jawa had it's origins in Arms Manufacturing before acquiring the licensing rights to build motorcycles based on the German Wanderer marquee. The name Jawa is is a derivative of the first two letters of the proprietors surname, Janecek, and of course the first two letters of the bike itself - Wanderer.
The Flying Merkel was a short lived American motorcycle based in Milwaukee, and later out of Middletown Ohio, produced from 1909-1917. These bikes were popular in motorcycle racing, notably board track racing, a dangerous an equally short lived sport where these machine would fly around a wooden, steeply banked track, reaching speeds of 100 MPH often with catastrophic results as motorcycles slid on oil, or split wood taking out other racers and many times fans who sat dangerously close to the top of the embankments. With high costs of track repair, extremely dangerous conditions, war and economic depression looking, the Board Tracks soon went the way of the Flying Merkel.
In 2010 a group of diehard Pre-War (WWI that is!) enthusiasts held a Cannonball Run - a race from coast to coast in the United States, bringing some of the few boardtrackers (and roadsters alike) back for another shot at glory (simply finishing the race). Not surprising, many participants were also AMCA members and a few had their Cannonball bikes on display along with a few other prime examples of what the early 20th century offered for two wheeled motor transporttation.

John Melniczuk is owner of British classic bike restoration and top powder coating shops, J&M Enterprises. Johns father and grandfather owned a Triumph dealership for decades until the fateful fall of Triumph in 1983. John's work has earned his bikes the cover-spot of top trade magazines as well as a full feature article in Classic Bike Magazine - focusing on Johns 1955 Triumph T100R factory dirt tracker. These were the bikes with the race kit available for a short time through Johnson Motorcycles (Triumphs west coast distributor and main competition proponent) limited to 200 sets - the exact number needed to be for sale in order for the bikes to meet the AMA's strict production guidelines. There are only three known complete bikes with this trim in the USA. A very rare bike indeed. Check out Johns website for pictures of this bike and his work at J&M Enterprises website. 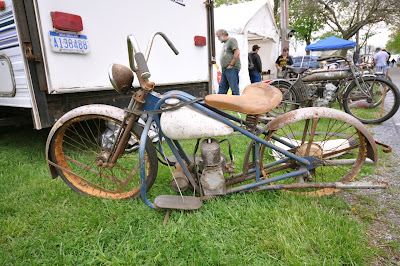 Simplex Motorcycles is the only American made motorcycle made in the south, New Orleans, Louisiana to be exact. From 1935-1960, Simplex design was that of simplicity. Some say this is more of a motorbike than a cycle, the later models featured automatic shift - far more sophisticated than any bolt in motor found on a bicycle.

The German based NSU (Neckarsulm Strickmaschinen Union) started off making knitting machines, then bicycles and in 1903 expanded into the burgeoning motorcycle market. The company became involved with motorcycle racing early on and in 1930,  Walter William Moore of Norton, came in to help the development of NSU's racing bikes by designing some new single cylinder machines.

You can see the similarities in the pictured machine and some of the early Norton Singles. This model features exposed rockers and valves, dual exhaust, though appears to be a single (dual pipes were often used in singles giving them a symmetrical twin look and theoretically improving performance.

The Scott Motorcycle Company (Alfred Angus Scott) was founded in 1908 and continued until the 70's. The early engine was pretty advanced for it's time incorporating a water cooled engines in both two stroke and four stroke models. In the 70's the remnants of scott was bought by Silk Motorcycles which used the scott Flying Squirrel model with updated frames. 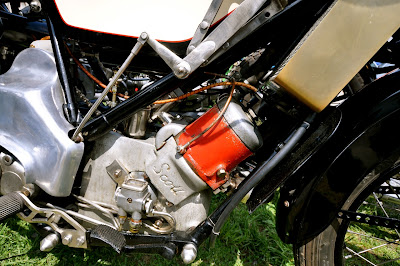 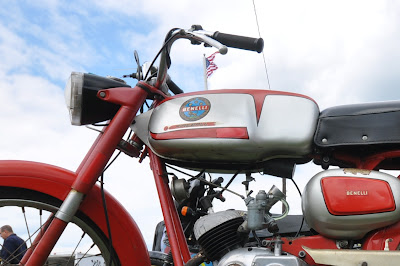 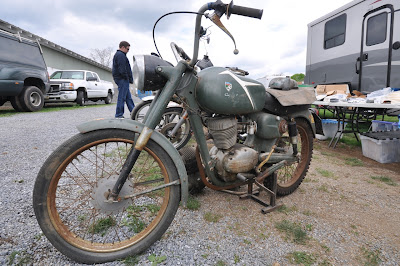 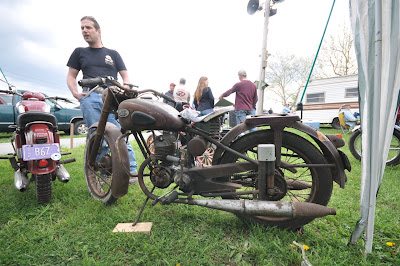 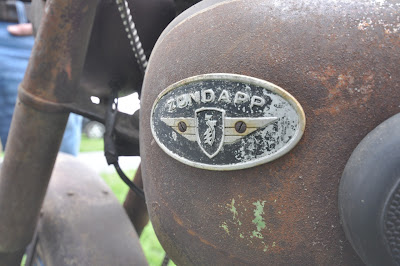 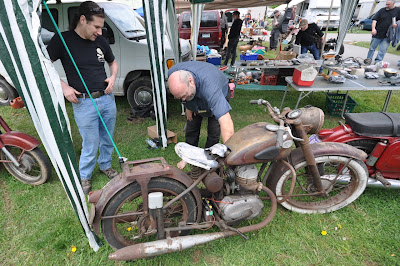 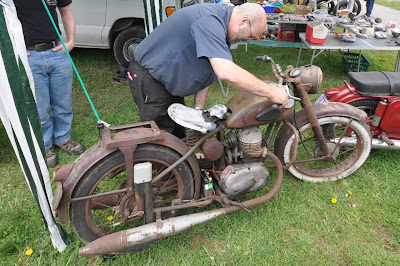 The Danish based Nimbus pictured here is a Type C , first produced in 1934, came with overhead valves and cams and the first telescopic fork! They remained in production through the war, though only producing around 600 units. 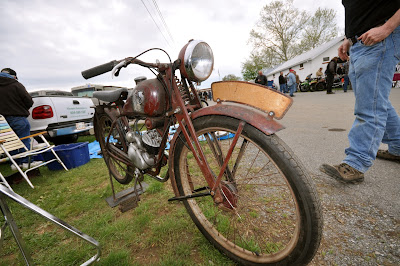 The Sunbeam Motorcycle Co produced bikes from 1912 to 1964. The earlier motorcycles were engines bolted to bicycles, which the British company had been producing since the mid-late 19th century. The biggest bikes were produced in the mid 40's to mid 50's until the scooter market really took off and focus shifted towards that demographic.

Saturday, as we were packing things up this beauty rolled by. a 1949 Triumph 3T fully restored. This was only the second or third year Triumph produced  non WD (War dept) motorcycles after WWII. and its simply stunning. This was also the one of the first few years for the new telescopic forks.


After admiring the 3T for a while, we packed the rest of the stuff. up, which is always a great place to be for great deals. A set of Pre Unit forks, oil tank were negotiated and tool box for a B33 was swapped for a bacon egg and cheese sandwich, then a few free rear fenders later it was time for the crew to say goodbye.

The swap-meets are about more than just acquiring "stuff", more than simply admiring others motorcycles. It's about the friendships made, the connections and networking of the community and just plain horsing around with pals. There is absolutely no better way to shake off the winter blues than a weekend at Oley.
Posted by Matt at 6:26 AM