Saturday, June 4th, 2011, picture perfect  late-spring weather and an English Car and Bike show just a mile and a half up the road from my house. Life doesn't get much better than that. Being that the blue sky and 78 degree air was calling for a ride rather than a rally, myclassicmotorcycle.com's John Lawless and I spent the morning playing with some helmet cams, racing around the private roads of a top-secret Delaware estate, John on his Manx, me on my Bonnie - playing cat and mouse with the cameras. Time got away from us and we missed registration for the gathering at Oakbourne Mansion.

After a quick stop at my garage, I switched from my Triumph to my Norton Atlas (just because) and headed over the hill to see the sea of Brit-iron bliss that awaited.

This show has been going on for many years and is very well attended by car enthusiasts from all over. Last year they added motorcycles to the menu, but the "sickle"-pickins were slim as word hasn't really reached the far corners British Motorcycle universe yet. But Brit Bikes are Brit Bikes and I can never get enough of them so i was excited to see what was there.

To beef things up, the Triumph "Modern Classics" had their own class, but being that they were all stock and you can walk into any Triumph Dealer and not only see them, but test ride them, I decided to leave them out of this post. Don't get me wrong, I love my Hinckley Bonneville, but we were there to see some old stuff.

1st up was Skip Chernoff's shiny 1969 Triumph Cafe' Racer.  Great shortened front fender, clubman bars polished aluminum, mmmm. The bike was fitted with a front Disc brake from the later era of  the Meridan-made motorcycle marquee, but given cafe's should be ridden fast, the extra stopping power is a nice feature.


Next up was a late 60's BSA Thunderbolt (shown above). The A65 series were BSA's 650 parallel twin line. Three models were available, The Lightning, (2 carbs, tach and speedo) Thunderbolt, (one carb, speedo only) and the Firebird (same as Thunderbolt but with high pipes for scrambles). This particular piece is one of the last years before BSA made the unpopular change to their Oil-In-Frame models in 1971. You can tell this is 68-70 by the twin leading front drum-brake and the finned rocker box. The earlier models lacked these features.
Triumph also went to the taller, slightly awkward Oil In Frame in 1971. While the their 650's were identical to the BSA frames (minus the engine mount placement and the frame color for 1971 only) Triumph produced a different Oil In Frame chassis for their T100 line(pictured below). (The T100's were 500cc twins - BSA dropped their 500 twins in 71 as they were a bit redundant being that BSA and Triumph were the same company at this point - and neither were doing too well with the looming Japanese invasion). The oiler fames on the T100's housed the oil in the cross tube under the gas tank, unlike the 650's (and subsequent 750's) that had a large oil reservoir that went through a giant down tube at the rear engine mount - which completely changed the look of the bike. The 500's looked a lot more classic therefor I like this 71. Took me a while to get to the point, but I got there didn't I? The high pipes on this 71 Mt100c give the bike an even more classic scrambler look. Cool bike for sure. 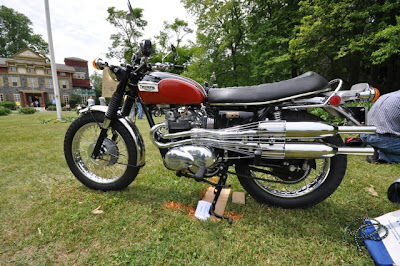 I recently came across a collection of bikes being sold off (I was asked to photograph them) and among all the goodies were a pair of Nortons. A Commando and an Atlas. The Commando was probably the best handling and highest value 70's British motorcycle - but the Atlas is older, more obscure and it's got a 750cc motor stuffed into a featherbed frame! When I laid eyes on the Atlas, I knew it had to be mine - love at first sight. In order to buy it, I needed to unload some stuff, and quick! Well I placed an ad and sold two 70's Oil-In-Framers and got the cash for the Atlas. One of the guys who looked at my 72 Bonnie was a nice gent named Ron Vance. He turned out to be an old friend of my dads, and was in the market for a 70's brit bike for a daily rider. He was interested in my Triumph but had his heart set on a Commando. I told him about the Commando for sale but told him hands off the Atlas. Turned out he already had an Atlas (pictured below) so we both got new Nortons later that week after I sold the Triumph to a father and son who were looking to fix something up.

The Commando's are nice bikes and great riders. The 71 (pictured above) was in excellent condition. Unlike Triumph and BSA who in the late 50's to early 60's stopped producing the separate gear boxes and went to a "unit" engine where the gearbox was housed in the same casing as the crank, Norton kept the separate gear box on most of their models up through the 70's.
The 1969 Bonneville was arguably the best year for these iconic bikes (well that and the 70 which are almost identical). These were the last years of the classic Triumph frames and the full width twin-leading-shoe front brake. 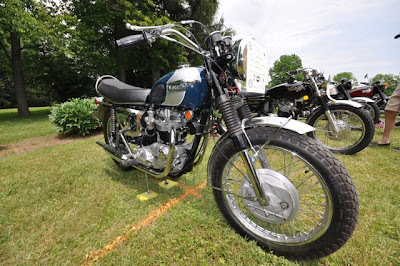 The next bike was my favorite, hands down - you just don't see many of these. A 1935 Norton ES-2. 4 speed gearbox 490cc single produced from 1927-1964. The early models were rigid frame with girder forks like the one picture below. Later they were fitted into plunger frames and eventually the Featherbed frame that Rex McCandless developed (with his brother) in the early 50's.  Short of a few changes to the stroke and an improved cylinder head, the engine  remained relatively unchanged for almost 40 years.

The next Norton was a 1946 Norton model 18. This bike has appeared in my blog a number of times (see Martins Eurosport show and the Turkey Pro). The model 18 had a rather complex overhead cam similar to the Manx. A very nice restoration. 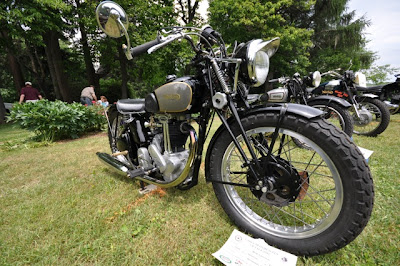 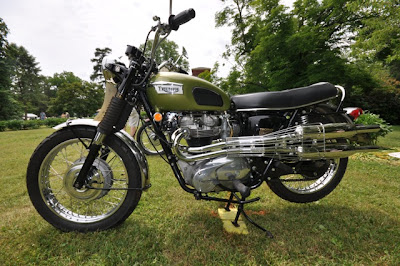 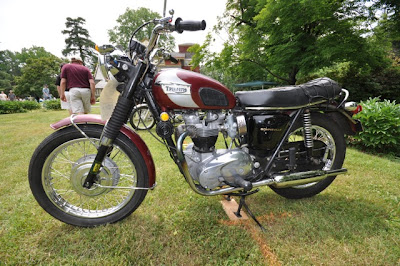 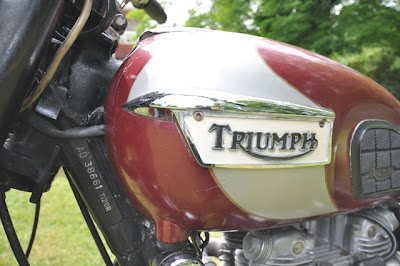 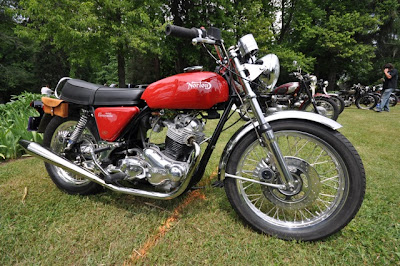 After chatting with some of the bike owners, John and I went for a stroll to admire the "cages". I'm not a car guy, but i loved what I saw. I'm not very knowledgable on cars but here's the quick rundown: 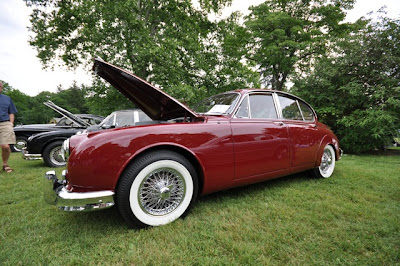 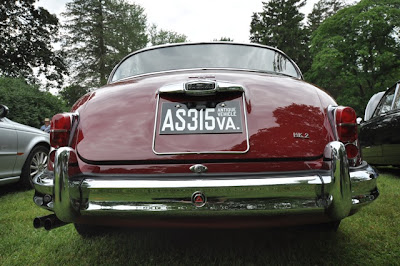 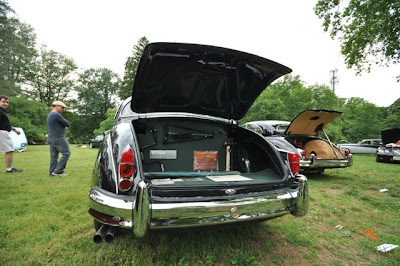 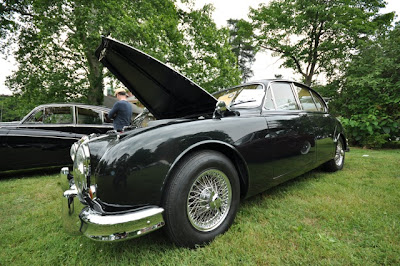 More Jags than I could shake a stick at. Gorgeous and classy. 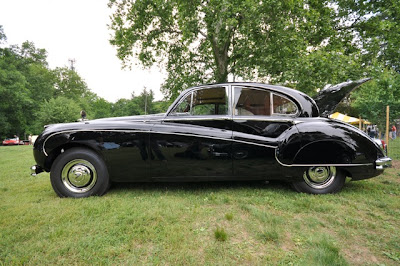 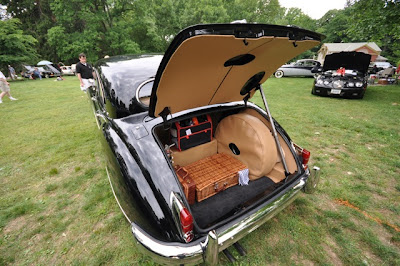 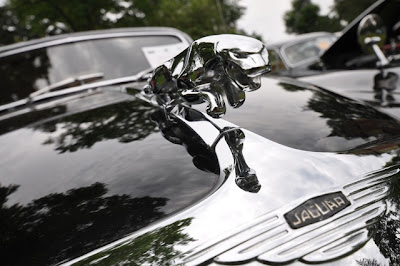 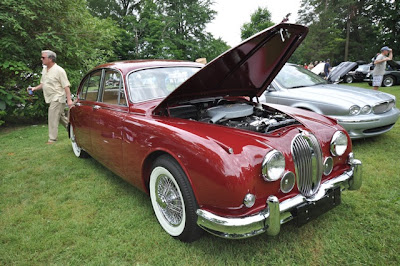 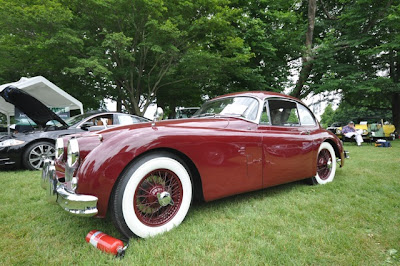 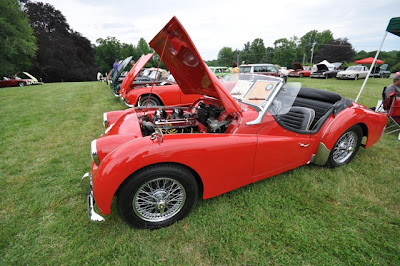 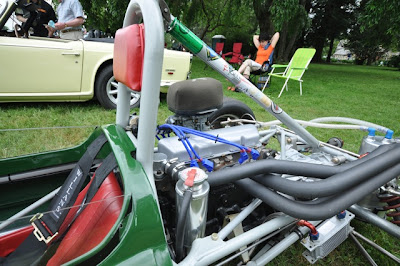 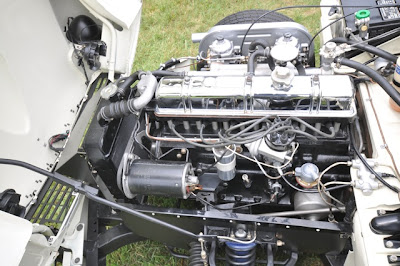 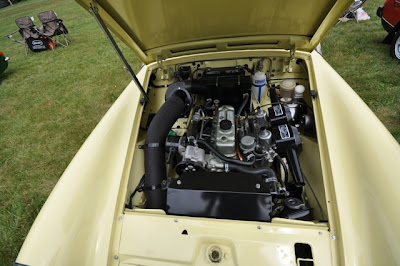 Despite not entering the concourse with our Norton Manx and Atlas, there were a few people gathered around our parking spot as we made our way back from the fairgrounds. We chatted up a couple of folks about our bikes and left feeling as though we had shown our cycles to our satisfaction. While concourse shows are cool, nothing beats riding, especially when the weather is just so damn pleasant. Maybe next year we'll plan ahead a little better, but for this particular day, ending a morning in the saddle with such a great display of British engineering was just about as perfect as it gets.
Posted by Matt at 8:10 PM