Day two at Barber I tried to get out and see as many things as I could - this proved to be a nearly impossible (Calling George Barber: Lets make next years event Vintage WEEK 2012!). After morning practice was finished, myself, John Lawless and his brother Michael set out to see the museum. I'd heard all about this place and was prepared to have my mind blown, but nothing could prepare me for absolute blitz of crazy-rare motorcycles in every direction; left, right, up, down, sideways, moving.... and above all, just about everything was right in your face where anyone can get inches from a cycle to inspect different features... ok I got very close (touching is an unspoken no-no ate concourse events and museums respectively, but looking at a serial number on a horn two inches in front of your face is ok!) Several models were on display that I am also in the process of restoring. Distractions!!!

I'm sure most people can see where I'm going here.... I spent too much time studying a select group of Motorcycles to see the entire exhibit. I need to make a trip back this year for sure.

Halfway through our tour we ran into Cook Neilson, who without any explanation, threw his leathers at John and his helmet at michael and said "follow me". Like a scene straight out of a Mentos commercial, we grabbed the gear and walked quickly with Cook leading the way through the "off limits" area of the basement, passing security, through a VIP section serving lunch and out the doors to a garden area next to the museums private entrance to the track  (presumably for some of the George Barber collection to be ridden right out of the workshop area).


As my eyes adjusted to the blinding sunlight I began to make out Cooks classic "Old Blue" Ducati, on which he won the 1977 Superbike race at Daytona, Paul Smart and his Ducati Signature model, a replica of one of his winning Dukes, and 2011 Daytona 200 winner, Jason Disalvo with his Daytona champion Ducati848Evo.  A small group a VIPs and track officials stood around while we mingled and got ready for the three Ducatis to do a parade lap around the track honoring "Ducstock" Ducatis National rally being held at a remote location on the tracks infield. 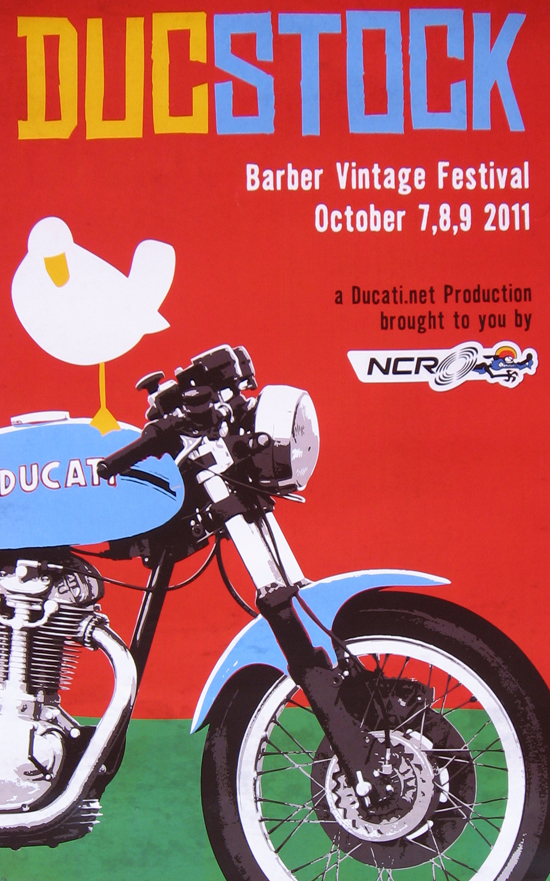 Email ThisBlogThis!Share to TwitterShare to FacebookShare to Pinterest
Labels: Barber