A Tiger Tale: By Snuffy Smith. PA to FLA on a Triumph Cub!

This is a story my father had published in Vintage Bike Magazine back in 2006. It's a cool story and I thought I'd share.

In the spring of 1965 times were sweet. I was a student at Pfeiffer College in Misenheimer, North Carolina, looking forward to spending a summer working as a construction laborer in Florida with my college buddy Chris Cordi. The previous winter I had traded `a beautiful 1963Triumph T-100, very much like the one Bob Dylan first owned, for a heavily abused ex-Larry DeSimone, 200c.c.T-20 Tiger Cub Scrambler which was used as a race bike for all of it's five years of age. The reason for trading down was to bank some money and still keep a motorcycle. At the time I lived and loved to ride. I still do.

Chris and I had planned to work for a commercial roofing company in Dania, Florida, where we would work as laborers. Chris was to drive his car down with all our clothes and gear, and I was to ride the Cub down to meet him.

As soon as my last final exam was over, I hitched a ride to my home in Devon, Pennsylvania, and proceeded to put the Cub together and get it running. The bike was equipped with two well-worn knobby tires, a solo Bates saddle, a small headlight and tail-light and no front fender. Thankfully, those were the days before state inspection for motorcycles.

I stuffed a change of clothes, some tools, some tape and snacks into a gym bag, and bungied it onto the rear fender. Chris had told me, "If that piece of shit makes it to the Florida border, I will come get you if you break down". Was that a challenge or an incentive? Both.

I left Wednesday around noon and stopped by my buddy, George Waite's house so he could check out my rig. He also was skeptical but encouraged me to enjoy the adventure. From Devon, my route took me down old US1 through Kennett Square, Mushroom Capital of the World, to Towson, Md., home of Triumph East. I rode around Washington, D.C., and by late Wednesday night I was looking for a place to rest.

Somewhere near Emporia, Virginia I pulled off the main road and rode up a hill and parked the Cub, leaning it against a tree. My first day on the road had put me about 400 miles into the Southland, with ten hours of, so far, no problems. I slept restlessly next to the Cub.

I rose before dawn the next morning and found a place to have some grits and eggs, and off I went. Riding alone for long periods of time gives a person an excellent opportunity to be introspective. It is, for me, the Zen of motorcycle traveling. I found myself wondering at the performance of the Cub. With each hour of riding I became more aware of all the things that could and should go wrong with this bike. I began riding more conservatively, knowing that this bike had had a hard life, and I didn't want to bring it to it's demise. Notice please, that I didn't say premature demise.

Sometime shortly after lunch I started to see at regular intervals, signs advertising a place called South Of The Border which was presided over by a man named, Pedro. For the next couple of hours I saw no less than 85 signs informing me of the wonders awaiting the traveler who ventured into Pedro's. The best part of South of The Border is that it marks the half way- point in the trip. I rode across South Carolina and by dusk arrived at Santee where I crossed into Georgia. I couldn't keep up the high speed of 50 to 60 mph so I had to ride the back roads. I finally ended up in Claxton, Ga., the Fruit Cake Capital of The World, at around ten P.M. A flea-bag motel was my resting place and reward for a long day in the saddle.

At six A.M. I was back on the road. I had to push the Cub out to the road to start it so as not to wake everybody up in the motel. Did I mention that the Cub had a reverse cone megaphone where most motorcycles have a muffler? Sometime before noon the Cub and I crossed into the State of Florida. In doing so, I knew that even if we broke down, Chris would come up and get us. I was starting to feel like the Cub was my partner. We had bonded. I had even given the Cub a name, Bill Bailey Johnson&Johnson Wrigley Shell. His name was an evolution based on events that had transpired during the trip.

Bobby Darin had a hit song called, Won't you Come Home Bill Bailey. Bobby had a song; I had a wish. Johnson & Johnson makes athletic tape. I, being a Phys.Ed. major in college, had many rolls of athletic tape at my disposal. This I used to patch the Cub together. This was in the era before the discovery of duct tape. Wrigley made chewing gum that could be used to stick things together and the aluminum foil that it came in made a great conductor when the fuse blew. Shell made motor oil. We used oil: lots of oil. We burned nine quarts of oil on the trip to Florida.

Now that I had crossed the Florida border, and even if the Cub quit Chris was there to pick me up, I decided that it was time to celebrate with a cold PBR, [Pabst Blue Ribbon]. I stopped at a roadside beer joint near Jacksonville and took a much-needed break. The proprietor was Gerald Huneycutt. I told him that I had a college buddy by the name of Wiley Huneycutt from North Carolina. Gerald told me that all Huneycutts were related, and that Wiley was his cousin. That allowed the conversation to continue long enough for two more beers. At this point I had to go or I would be spending the night at Gerald's beer joint. Chris was expecting me to meet him at The Elbow Room in Fort Lauderdale this evening, and I had a long way to go.

As the sun set and the light started to fade, so did the light coming from the headlight of the Cub. The Cub, being a scrambler model, was equipped with one of Joseph Lucas's greatest masterpieces of electrical engineering, "The energy transfer" or "ET" ignition lighting system. The only way to maintain enough juice to run the ignition was to run with the lights off. I dropped into the draft of a '52 Chevy panel truck and stayed as close to his rear bumper as I could. This allowed me to hide from the police and keep a reasonable speed as I traveled down US 1. Somewhere south of Cape Canaveral, I was pulled over by a Trooper and advised that I couldn't tailgate my way on this road. When he asked me where I was going, he was in disbelief; but when I told him where I had come from, he became quite amused and told me enthusiastically, that if I go over to Route A1A it is so well lighted, that I wouldn't need lights, and the speed limit would be something that the Cub could handle.

Once on A1A it was a loooong sloooow ride to Ft. Lauderdale. At 11:45 Friday night Chris Cordi heard a motorcycle through the open door of The Elbow Room, and walked out into the deserted street. Even though I was a block away, the Cub's open megaphone could not be missed, nor could the cloud of white smoke coming from the exhaust. We had made it.

I love riding motorcycles. It gets in your blood. I wanted to go to Florida to work for the summer. It made perfect sense to ride my Cub there. This trip was the first of several adventures on the single seat Triumph Cub Scrambler.
A year later my college roommate, Ed McDuell and I rode the Cub from Misenheimer, North Carolina, to Daytona for the "200." The Cub still had a solo saddle, but that is another story. 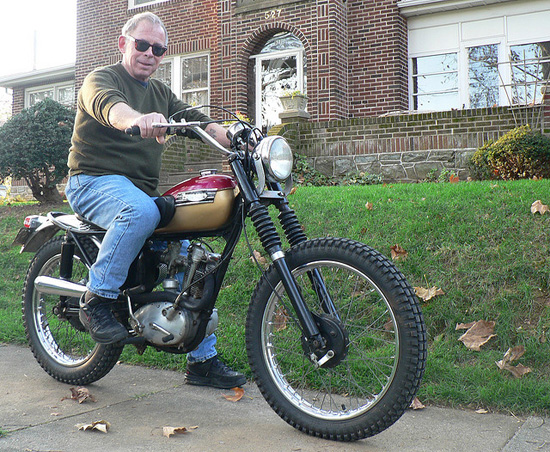