I say, if you're going to build and ride an old school chopper, you need to have the style and attitude to back it up. This picture of Dennis Hopper in Easy Rider pretty much sums up both. 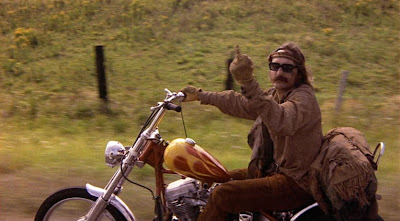 This one from Glory Stomper works too: Note weathered grizzly biker style does NOT apply to chick on the back... This is KEY to the look. 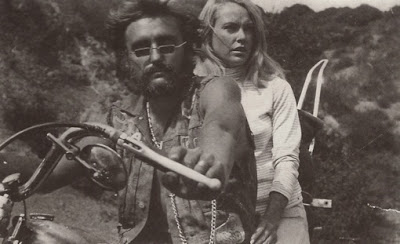 The Glory Stompers (1968) 1- Dennis Hopper as Chino: "Here's the situation, baby. Like we accidentally snuffed out your old man. Now the only way out for me and my people is to either snuff you out, or to sell you to some high-class Mexican friends of ours. Now, being good people, we decided to sell you." 2- "Hey, baby, I just want to get loaded." Girlfriend: "Chino, get loaded later." Chino: "Get loaded later? What does that mean?" predating some of his most brilliant dialogue in Blue Velvet by some 18 years.
Easy Rider: (1969) Conversation between Jack Nicholson (as George Hanson) and Dennis Hopper (as Billy): George Hanson: You know, this used to be a helluva good country. I can't understand what's gone wrong with it.
Billy: Man, everybody got chicken, that's what happened. Hey, we can't even get into like, a second-rate hotel, I mean, a second-rate motel, you dig? They think we're gonna cut their throat or somethin'. They're scared, man.
George Hanson: They're not scared of you. They're scared of what you represent to 'em.
Billy: Hey, man. All we represent to them, man, is somebody who needs a haircut.
George Hanson: Oh, no. What you represent to them is freedom.
Billy: What the hell is wrong with freedom? That's what it's all about.
George Hanson: Oh, yeah, that's right. That's what's it's all about, all right. But talkin' about it and bein' it, that's two different things. I mean, it's real hard to be free when you are bought and sold in the marketplace. Of course, don't ever tell anybody that they're not free, 'cause then they're gonna get real busy killin' and maimin' to prove to you that they are. Oh, yeah, they're gonna talk to you, and talk to you, and talk to you about individual freedom. But they see a free individual, it's gonna scare 'em.
Billy: Well, it don't make 'em runnin' scared.
George Hanson: No, it makes 'em dangerous.
Dennis Hopper lived free and died free. Rest in Peace brother.
Posted by Matt at 3:06 PM