Where there's "Smoke and Throttle" there's Fire! Aka Chris and Drew torch a bike. 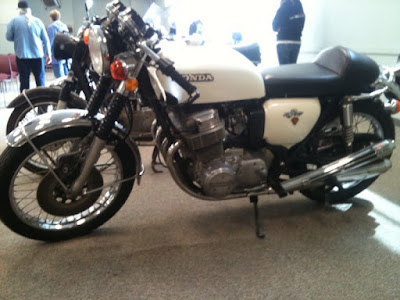 I got a frantic phone call today from my friend Drew who told me he and our friend Chris accidentally set Chris's CB750 clubman on fire. "Oh no, this is great, get me the full story and some pics and this is going up on S&T tonight" I said.
Heres Drews account via email:
OK so I'm a much better story teller then i am a writer, so bear with me and feel free to fix my grammar and what not. (I decided not to because it reads just like drew talks: one frantic run-on sentence after another. -matt)

I got a call from chris telling me he's going to try and get his 750 running today, so of course im in. I get over to Chris's around 11 and hes working on some old ass mini bike, so after some bull-shitting we decide to get on the cb750. The bike is pissing gas from the leaking petcocks and wont start so I tell him give it a little squirt of carb cleaner and lets see if she fires up. Just like expected it fires right up and blows a ton of leaves and other shit right out the exhaust, so now were totally stoked and want to really hear this thing run. I push the starter and this time chris goes to town with the carb cleaner and BAM, the bike backfires and in an instant it's on fire. Chris starts scrambling looking for anything to put the fire out with but theres nothing around, no hose, no cat litter, no towels, nothing! So i grab my iced coffee and throw it on the bike but that doesn't do much. I relize i need to get this tank off the bike ASAP before it fucking explodes. So i rip off the tank not realizing its also on fire. It's still pissing gas out the petcock and is on fire - and now its in my hands! So I run the tank out of the garage like a flaming football and spike it onto the ground. You shoud have seen Chris's face when i smashed the tank on the ground. He later told me he didnt relize at the moment the tank was burning and was pissed that I threw it, hahaha. He got over that quick. So now the tank is burning in the middle of the street and its not stopping. We start looking for something to put the fire out with. The neighbor has a hose so Chris runs to get it and I run back in the garage to find the bikes carburetors still on fire! I blow on it and get it to go out quick. I run back out to the tank and Chris hands me a hose without a sprayer on it. So im trying to just soak this tank but its not going out - it just keeps burning. Oh and did I mention this is going on right behind my 61 Buick! I hand Chris the hose and yell at the neighbor to get me some towels so I can smother-out the fire. Finally he does and I throw it on top of the tank but the fire is still burning. Chris kicks the tank over so that the petcock isn't pissing out gas, I soak the towel in water and toss it on top of the tank. Finally after 10 min the fire is out no thanks to the neighbor, who couldn't move any slower getting the hose and the towels. But we did get the mini bike running, so it wasn't a total bust and i got a cool burn on my stomach. 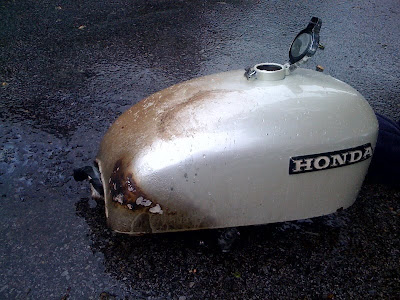 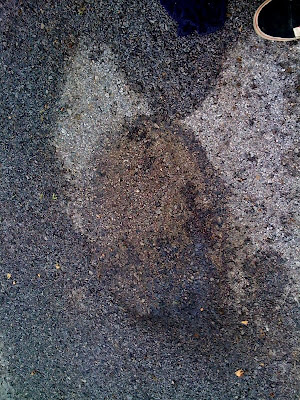 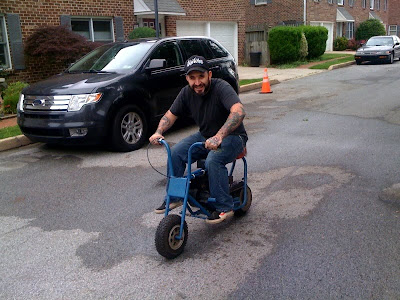 Drew on the mini bike. 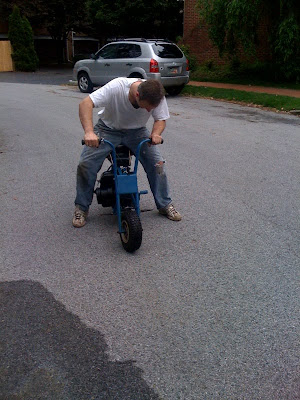 Captain Carb Cleaner contemplates how to make his mini a bit hotter...
Posted by Matt at 6:27 PM