Supercharged Triumph Tiger Cub goes for the ton at Bonneville

Every year, motorcycle enthusiasts from around the world descend on the Bonneville Salt Flats, deep in the desert of Utah. Many are there to set new land speed records by building bigger and faster bikes than previously imagined. However, not all records are in the 200+ mph range. In the 50's the Triumph Tiger Cub held a land speed record, earning it the title king of the 200cc singles. Currently, Bonneville has many classes including the 250cc vintage class. Chuck Zeglin and Steve Moody set out to build a cub Salt Flat Racer that could push the limits of the former record. This proved to be no easy task. Getting a cub to break the 100mph mark is a feat in among it's self. They are almost there and at the rate they're going, they will probably far surpass that somewhere down the road.
I have always been interested in Cubs. My dad left me his 1961 T20 bitsa. It's not terribly fast, but it's a blast to ride. I started thinking about building another Cub into a full blown race bake to see what it could do. Turns out, according to friends of my dads, he had this very same idea before he passed. Making small, simple, air cooled engines go faster has always interested me more than making bigger engines that have higher capabilities. When I learned about Chuck and Steves Cub project, I had to know more. I contacted chuck and he was more than happy to answer some questions:

First off, when did you get the idea to take a Tiger Cub to Bonneville? Had you raced there previously?
Well....... at an early age I took an interest in danger. Only
joking! I first went to Bonneville in 2002 to help friends with a
roadster that they were racing. In 2003 they let me make a run in the
roadster and I was hooked. In 2004 I decided I wanted a Cub dirt bike
just to have fun on. I found a Cub basket case and drug it home.
Shortly after that my friend Wes at Four Aces and I were talking about
Bonneville and thats when the light bulb went off. My dirt bike
project then became a Bonneville racer project. I already liked Cubs
so it seemed like a natural. The Cub was raced in 06 at Bonneville for
the first time. Went 79 mph with a used bottom end a freshened up top
end. Low performance cam. I was very happy with that.

There are two of you (I believe) at Zeglin Moody Tiger Cubs. What are your roles?
"Team Cub" consist of me (Chuck Zeglin) and my good friend Steve
Moody. I built the bike and ride it. Steve sponsers me and helps me
campaign the bike. Steve is my crew, helps with the bike, starts me at
the line (remote starter) chases me down the course and picks me up. I
could not do it with out his help.

What class does your machine fall under at Bonneville. What are some of the key parameters the bike must meet to qualify in that category?

The class I am currently in is APS-VBG which stands for Special
Construction Partial Streamlining- Vintage Blown Fuel. 250 cc class.
Special construction mainly deals with the frame. It allows a more
radical machine. A custom frame, unlimited wheel base, two engines
even. Seat height must be below top of rear tire. No restrictions on
foot peg location. So my Cub is actually on the mild side for the
frame class. I have a modified stock frame with a 4" stretched swing
arm. Partial Streamlining allows you to have a fairing. Vintage Blown
Fuel means a pre 1956 engine (head and case) With cubs though you can
run an engine up to 1960 or so, any engine with the one piece crank
case. Those are grandfathered in because they have no real advantages
over the pre 1956 engine design. My current engine is 1958. Thats a
good thing, availability of good engines is a lot better. You can run
a Super or Turbo charger in the class. "Fuel" means you can run
anything you want. Alcohol, nitro or even unapproved gas. In fact
right now I'm just running unapproved gas. See in a "Gas" class you
have to run their gas that they sell and then they seal your tank to
make sure you don't tamper with it. So even if you're running their gas
but you don't have your tank sealed that would be considered
unapproved gas. I hope that makes sense. I will make the switch to
alcohol and nitro soon.


How many years have you attended Bonneville and what were your results to date?


Lets talk tech. Year of bike? Whats stock whats not? Bore? Stroke? Compression ratio? Cams? Valves? What kind of fuel? Max rpms you've run without problems? And obviously the blower - who did the machining and engineering on that number? I see what looks like a velocity stack sticking out the side. What type of carb are you running and how did you jet it. What were some of the challenges when fitting this supercharger?


1958 frame, 1958 engine. Frame: swing arm extended 4", frame hoop
around back of seat kicked up for tire clearance. Bolt in tube to
replace stock gas tank. Ceriani forks. Sun rims, spool front hub.
Barnes quick change rear sprocket arrangement. Owner built custom
finned brake drum, seat, clip ons, oil and gas tanks. Engine: At first
200cc's, used stock bottom end with fresh top end, .060 over 10.5 to 1
piston, head ported with later bigger intake valve. Stock low
performance cam. After that engine was bored from the stock 63mm to
71mm with a Triumph 650 piston then used. That makes it 250cc's.
Custom head with raised/relocated intake port. 1" Amal Standard carb
with Amal "matchbox" remote float, 150 main jet. Big bore raised
compression to 13.8 to 1. "R"code triumph cam now used. Alpha roller
bearing big end. Later crank with bigger crank pin. 1 1/8th exhaust &
1 5/16th intake valves. 35 degrees fixed timing. 7000 rpm. In this
form went 94.260 mph. Crank shaft broke (crankpin) right after this.
Hard miles I guess. To try a supercharger the engine was put back
together with stock bore and stroke. A Chevrolet smog pump was first
tried as a supercharger. I did all the engineering/fabrication. Others
have had good success before with smog pump super chargers. Did not
work out so well for me. Main problem for me was I was turning the
pump the opposite direction from stock. This is OK but you have to
completely reverse the vane seals inside the pump. I found out this
information too late for Bonneville last year but tried what I had
anyway. Pump self destructed on the first run. Was reading 9 pounds
and feeling pretty good before it blew. Coasted down the track at 59
mph. That was 2010. For 2011 I have rounded up a Aisin 300 roots style
blower. This blower comes on a little Japanese 660cc inner city car
not sold here. This should work out pretty well. A little big so I
will only drive it about 45% crank speed. I will let you know how this
goes. 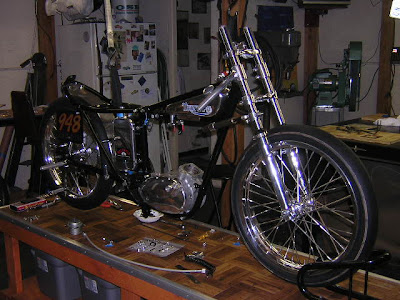 How do the conditions at Bonneville effect the bikes performance. I've heard the salt can be loose and narrower tires help cut though the slop. Any other factors you've come up against?

As far as conditions not much seems to affect the bike at the
speeds I'm traveling. After the 2006 season I did go to some proper
Goodyear racing tires. They're 23.5 x 4.5 -18 front and rear. They are a
slick tread motorcycle front runners currently used on drag bikes. I
run 50 lbs in them. I'm sure they're a little faster having a smaller
footprint and that they will safely take more air pressure. Fairing or
not the bike is very stable.


You've mentioned that the fairing adds about 5mph. Any thought of going with a full shell or would that change the class completely?


Within the rules I can still add a front fender covering the top
half of the tire. Also I'm allowed a small tail section behind me.
Both will help and will be added at some point. In Partial
Streamlining the riders complete body except for hands and forearms
has to be visible from the side. A complete shell or body you actually
sit inside is only legal in the full Streamliner class.

There's no big check for beating a record. What motivates you to keep going with what appears to be a costly and time consuming project? What is your goal? 100mph? after that will you go for a higher record?


What mainly motivates me is the fact that it's so much damn fun.
Also it's so rewarding when you try something new and your bike goes a
little faster. It feels really good. Also the people you meet are the
greatest. Everybody helps each other. A perfect stranger will go out
of their way to help you. Our immediate goal is 100mph. I know of only
three Cubs that have gone that fast, one being a full streamliner back
in the late fifties. Dale Martin who is in the SCTA club the
Sidewinders with me has gone 101mph on his Cub. And it was his father
Bill Martin with his sons help that set a record of 139 mph in a full
Streamliner in 1959. If I can do 100 I would like to build a totally
new machine, still Cub powered, and go for higher speeds. Since I've
gone almost 95 on gas with no blower I fell pretty good about hitting
100 with the current machine.


Any other projects in the works or in the back of your mind? Any other bikes tickle your fancy?

I have an E-Type Jaguar project in the garage that I want to get
on the road. That will take some time. For racing I'm pretty stuck on
Cubs. I have thought of a Cub road race bike also. Maybe down the
road. For a road bike I would get a late model Triumph like a
Thruxton. I like lots of bikes but I'm mostly a triumph guy. Ducati's
are good too. For my next race bike I have thought of a duel engine
Cub powered machine. Supercharged with high gear only and centrifugal
kart type clutch.

Chuck and Steve are raising funds for their project by selling Team Zeglin-Moody shirts. Support their cause! Click here to buy a shirt. 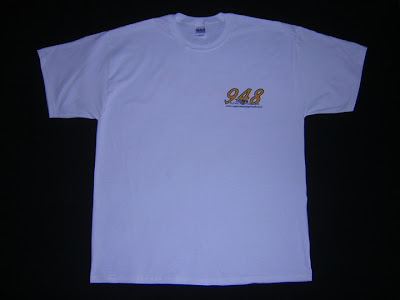 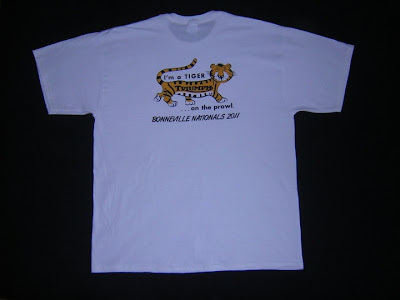 I look forward to hearing Chuck and Steves results for 2011. I think hitting the magic ton will be no problem this time around. They'll be in a small group of people who have achieved that number. Once that's accomplished I see them going for something even faster. Plus with all the other T20 projects they have in their minds, it seems the skies the limit. I can't wait to see a dual engine cub take to the salt. How about you?
Posted by Matt at 6:14 AM