Between the two World Wars, hundreds of Motorcycle Clubs across America were engaging in various new, creative and somewhat reckless forms of competition. Combine European football, vintage Harley Davidsons and/or Indians - with broken legs and smashed fenders: You've got Motorcycle Polo! Dubbed Motoball by fans, it's apparent that touring, racing and hill climbs were not enough for the early century cyclist, so from coast to coast, motorcycle clubs began forming teams and competing against each other - in front of large crowds, no less. The object? Get the ball through the opposing teams posts as many times as possible during the four 15 minute quarters - and hope that no limbs are mangled in the process.

So popular was the sport that many newspapers started covering it in their sports sections. The allure of dangerous motorcycles colliding with each other, while a "true" sport was being played brought large audience every week. The matches spread all over the east coast (and eventually the west) but in particular, the Eastern Pennsylvania and Southern Jersey regions had a number of MotoBall clubs: From Reading, Philly, Camden all the way to Atlantic City where someone undoubtably traded their polo horse to a high-dive attraction and decided a Harley was a much more practical approach to play the game. 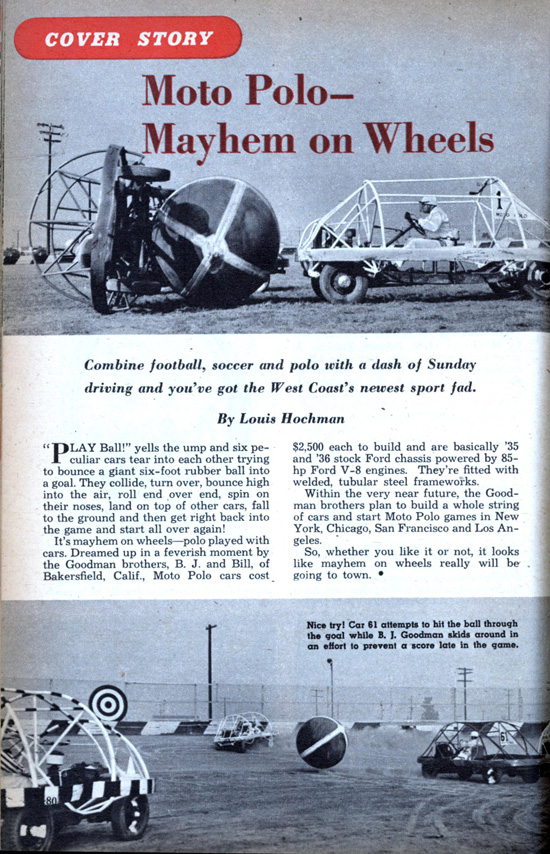 With the coming of the Great Depression, the number of groups participating in MotoBall dwindled and died off all together when WWII broke out. Most clubs saw the sport as a novelty by this point and were focussing on steeplechase and enduro-racing. Years later, various forms of MotoBall popped up. Some used oddly built cars that pummeled a giant, 6 foot rubber ball around a field. In England, Motorcycle Polo has regained popularity using modern bikes and a much larger ball - which surely makes it a bit easier to kick without collision. In parts of Europe and Africa, a two-up polo is played on bikes, the passenger wielding a mallet hits the small wooden ball, much like Horseback Polo.

Today in the States, besides water polo, horses are the predominant force for the sport. The thoroughbreds are no longer forced off high dives in Atlantic City, and classic Harley's are no longer used in an over glorified demolition derby (though someone did try to bring two-wheeled crash-up matches back during the 80's in Daytona.... but that's for another entry). I say it's high time we relaunch the sport. Bike has to be air-cooled and participants must wear tweeds, felt lettered sweaters and collars. Its a gentleman's sport after all... So who's in?