What can really be said about the late great Gary Nixon that hasn't been beautifully eulogized in every major motorcycle publication already? Not much. Gary Nixon was a national treasure and a motorcycle icon.
Growing up with a father into racing vintage motorcycles, Gary Nixon was a household name for us. My father was ecstatic after purchasing a Rickman Trackmaster frame from Gary for his Triumph T140. His enthusiasm after meeting Mr Nixon peaked my curiosity - I looked through my fathers books at pictures of Gary sliding his Triumph flat tracker at breakneck speeds, sideways through the corners - and wondered how it was even possible to do that. I spent days trying to get my BMX bike to slide like that - to no avail. Eventually I did manage to slide my rear tire through some loose gravel which resulted in a painful hour with my mom removing stones from my bloody arms and legs. After that, I decided to leave it to the pro's.
Around this time I found a book in our local library called Gasoline Cowboy by William Campbell Gault. The book is a historical fiction look at a young man rising in the ranks of the AMA pro circuit - racing against he likes of Nixon, Dick Man, Gene Romero and others. These names stuck with me and my interest in racing history grew. Going to AHRMA races with my dad, I was able to see some of these people and their bikes - though Gary Nixon always seemed unapproachable in my eyes (I was also very young and shy). I'd heard the stories: "Which one of you mother-fuckers is coming in second today?" He'd often say this to his opponents at the starting line. He was very good and he knew it.
A few years ago I found a copy of Gary's Biography Racer: The Gary Nixon Story, by Joe Scalzo (1970). A  G-rated look at the career of Gary through the 60's. Knowing some people who worked with Gary back in those days, I got to hear the R-rated version: It's much better. These guys were racing motorcycles in a time when it was a wildly-popular American sport with a massive fan base. Gary and his contemporaries partied like rock stars and still managed to get up the next day and win races. They'd laugh about how much they'd imbibed the night before, yet still succeeded to get on the winners podium - where they'd begin that nights party all over again.
In 2011, I finally had the pleasure of meeting the great Gary Nixon at the Triumph Come Home Rally in Pennsylvania. He was very gracious and took time to chat with me for a bit. I showed him the old pictures I'd been given by my cousin, John McIlvaine (a mechanic for Nixons protégé: Gary Fisher). Gary filled me in on some details about the shots, the events that took place those days and signed all of the photographs. Yeah, I fanned-out a bit - much like my dad did when he bought that Trackmaster-frame from Gary 25-some years earlier.

I'd never've imagined that my first real encounter with the racing legend would also be my last. Gary passed away just a month and a half later at the age of 70. Based on his hard riding and many, sometimes near-fatal crashes, it's a wonder that he survived his days as a professional racer, especially when so many of his contemporaries did not. Somewhere, in that big half-mile oval in the sky, Gary is certainly pulling up next to his fallen brothers with a grin and saying "So which one of you mother-fuckers is coming in second today". 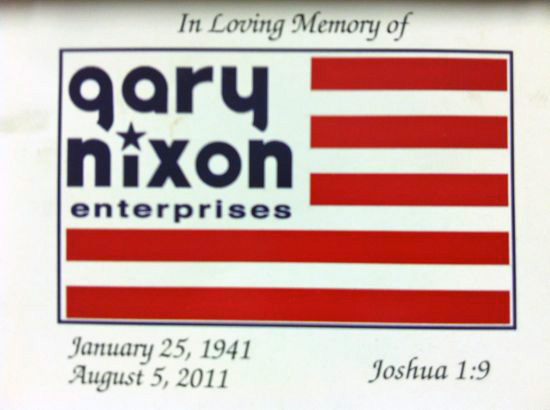