Jack Simmons - a name that may be somewhat unknown to those on the east coast, was a legend in his own right from the 50's as a TT rider and later on with his "Norton Gang", as they were known. The Norton Gang went against the modernization of factory road racing by campaigning a number of standard-production Norton Commandos, complete with high bars and low pegs. The Norton Gang were up against stiff competition during the later part of the 60's into the 70's when most were riding Rob North framed Tridents, Rocket 3's or Japanese two stroke multiple cylinders - but their steadfast decision to ride the way they saw fit, as they did in the old days, made them notorious rebels of the day. 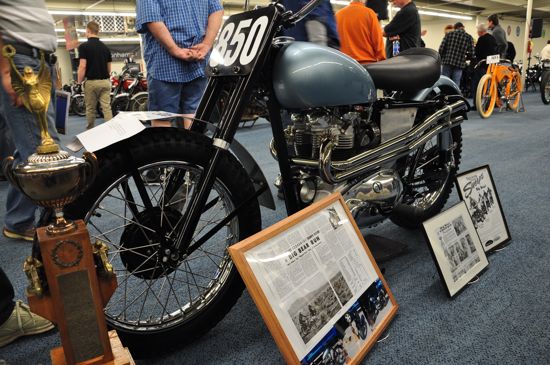 Jacks biggest moment in racing history would be his 1957, third place finish at Big Bear aboard a Johnson Motors (Triumphs west coast distributor) supplied TR6. Big Bear was the periods largest "hare and hound" competion in the U.S. - riders essentially took off on a grueling dash through the desert with no real course mapped out. The first rider to get to the finishing point (likely marked by a large, smokey tire-fire) would be the winner. Out of the 718 riders, only 129 completed the event. Despite a crash and an electrical short (damn you Joseph Lucas!) Jack made it to the finish just behind Bud Edkins and Buck Smith, both also donning Triumph TR6's supplied by Johnson Motors.


Being that the Triumph Jack rode belonged to the Johnson Motor Company, it went back after the season and the bike faded into obscurity. A few years ago, Jack, a skilled machinist and restorer, set about replicating the Big Bear Triumph after he found a matching numbers 1956 TR6. Going on photos and memory, Jack built the bike from the sludge trap all the way up to the custom flat front fender (designed to keep dirt and brush from jamming the front wheel and the dust out of the riders face). The results speak for themselves, Jacks bike is a beauty!


After taking some pictures of the eye catching cycle, which was offered at this years Bonhams auction in Vegas, Jack approached me to see if I had any questions. We chatted a bit about the bike, the original 650's history and the replica bike Jack built. Our conversation led to Jacks line of work, a semi retired man now, Simmons runs a machine shop from his home in Lenore Idahoe. I told him I was from the Philadelphia area and his eyes lit up. "I do a lot of work for a shop just outside of Philly, over in south Jersey. Ever hear of John Melniczuk at J and M Enterprises?" I laughed "You're talking to one of Johns apprentices!" - John Melniczuk has been teaching me the skills and secret-tricks to completely rebuilding my 1966 UK-spec Triumph Bonneville - "In fact, you just did a valve job on my T120!"


Jack had a reserve on his bike, which it did not reach, though he was a bit reluctant to sell to begin with. I personally think the bike should stay with him, as it's such an important piece to his legacy.


Jacks machining work is second to none and I could not recommend him any higher. His meticulous approach to machining is evident on his TR6 and the bikes he has overhauled for John Melniczuk - who's also a "do it right or don't do it at all" type of guy. If John is satisfied with Jacks work, rest assured that everyone who uses Jacks services will be as well. "Jack Simmons Machine Shoppe" can be located by doing a quick internet search - though besides a telephone number and address, there is no website to plug. Again, Jack prefers to do things the old fashioned way.


It's amazing that nearly 3000 miles from home I found the very man who I'd heard so much about when John and I sent him my cylinder head - and to think, in this big country, so far away, I finally came to the realization that the vintage motorcycle world is a small world indeed.
Posted by Matt at 4:19 PM